In chapter 9 of my book, Money, Bank Credit, and Economic Cycles (pp. 789–803), I design a process of transition toward the only world financial order that, being fully compatible with the free-enterprise system, can eliminate the financial crises and economic recessions that cyclically affect the world’s economies. Such a proposal for international financial reform is, of course, extremely relevant at this time, since the disconcerted governments of Europe and America are planning a world conference to reform the international monetary system in order to avoid future financial and banking crises such as the one that currently grips the entire Western world. As I explain in detail over the nine chapters of my book, any future reform will fail as miserably as past reforms unless it strikes at the very root of the present problems and rests on the following principles:

This radical, definitive reform would essentially mark the culmination of the 1989 fall of the Berlin Wall and real socialism, since it would mean the application of the same principles of liberalization and private property to the only sphere — finance and banking — that has until now remained mired in central planning (by “central” banks), extreme interventionism (the fixing of interest rates, the tangled web of government regulations), and state monopoly (legal-tender laws, which require the acceptance of the current, state-issued fiduciary money) — circumstances with disastrous consequences, as we have seen.

I should point out that the transition process designed in the above-mentioned chapter of my book could also permit, from the outset, the bailing out of the current banking system, thus preventing its rapid collapse, and with it the sudden monetary squeeze that would be inevitable if, in an environment of widespread broken trust among depositors, a significant volume of bank deposits were to disappear.

This short-term goal, which, at present, western governments are desperately striving for with the most varied plans (the massive purchases of “toxic” bank assets, the ad hominem guarantee of all deposits, or simply the partial or total nationalization of the private banking system), could be reached much faster and more effectively, and in a manner much less harmful to the market economy, if the first step in my proposal for reform (page 792 in my book) were immediately taken: to back the total amount of current bank deposits (demand deposits and equivalents) with cash, bills to be turned over to banks, which from then on would maintain a 100% reserve with respect to deposits. As I explain in chapter 9, chart IX-2, which shows the consolidated balance sheet for the banking system following this step, the issuance of these bills would in no way be inflationary (since the new money would be “sterilized,” so to speak, by its purpose as backing to satisfy any deposit withdrawals).

Furthermore, this step would free up all banking assets (toxic or not) that currently appear as backing for demand deposits (and equivalents) on the balance sheets of private banks. On the assumption that the transition to the new financial system would take place under “normal” circumstances, and not in the midst of a financial crisis as acute as the current one, I proposed in my book that the freed assets be transferred to a set of mutual funds created ad hoc and managed by the banking system, and that the shares in these funds be exchanged for outstanding treasury bonds and for the implicit liabilities connected with the public social-security system (pp. 796–797).

Nevertheless, in the current climate of severe financial and economic crisis, we have another alternative: apart from canceling “toxic” assets with these funds, we could devote a portion of the rest, if desired, to enabling savers (not depositors whose deposits would already be backed 100 percent) to recover a large part of the value lost in their investments (particularly in loans to commercial banks, investment banks, and holding companies). These measures would immediately restore confidence and would leave a significant remainder to be exchanged — once and for all and at no cost — for a sizeable portion of the national debt, our initial aim. 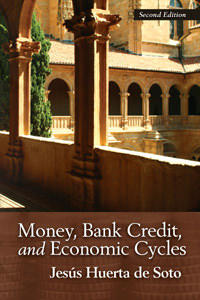 I conclude with an important final warning: naturally (and I must never tire of repeating it) the solution I propose is only valid in the context of an irrevocable decision to establish a free-banking system subject to a 100% reserve requirement on demand deposits. Any of the reforms noted above, if adopted in the absence of a prior, firm conviction and decision to change the international financial and banking system as indicated, would be simply disastrous: a private banking system that continued to operate with a fractional reserve (orchestrated by the corresponding central banks), would generate — in a cascading effect, and based on the cash created to back deposits — an inflationary expansion like none other in history, one which would eventually finish off our entire economic system.